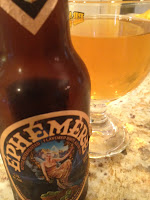 (5.50% ABV)  Poured from the bottle into a goblet at the home office to celebrate a birthday.  The beer poured a brilliant golden color with no head whatsoever -- perhaps as a result of our extra-gentle pour so as not to disturb the yeast on the bottom of the bottle.


Éphémère smelled of yeast and apples -- there was lots of ripe fruit waiting to be unleashed from that bottle. By there was also an underlying funkiness to the nose -- we've seen it referred to as a stinky cheese, and we'd have to agree.  The funkiness was typically Belgian -- even though this beer was produced by one of our favorite craft brewers in Canada.

The taste followed the fruit -- apples dominated, but they were dry rather than sweet, and there was a little bit of lactic sourness to keep things interesting.  The beer was yeasty, with just a bit of spiciness to it, as well.

It had a thinnish mouthfeel with decent carbonation. We love this brewery, and they didn;t disappoint. B
Posted by farlieonfootie at Monday, March 18, 2013