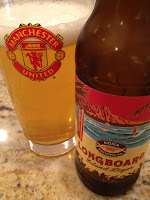 Poured from a bottle at the home office. Longboard Island Lager was a lemon-tinged, yellow color with a fluffy, two fingered head of pure white bubbles.

The beer' smell was rather vague. We detected some some slight breadiness in it, but that was about all.

On tasting, the beer didn't reveal much, either.  It was a relatively straight forward lager, with the only surprise being some slight citrus (lemon) that we picked up.  There was decent carbonation and while the beer was easy drinking, we didn't find much to write home about.   It's definitely a beginner's craft beer -- not our favorite, but better than a Bud. B-
Posted by farlieonfootie at Tuesday, March 26, 2013