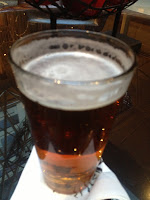 There were so many good beers tested at the Craft Brewers Conference that it's difficult for us to pick out any one in particular -- so for our first review we'll stick with one of the basics:
(5.20% ABV) Fat Tire Amber Ale is a great example of what's happening in the beer world. Long held up by visitors to Colorado as "the" beer to seek out when traveling to the western part of the country, it's lost a bit of its luster over the past couple of years as the craft beer business has exploded. It's not so much that Fat Tire has gotten worse, or even that the beer is much more broadly distributed now -- it's that so much of the rest of the brewing world has gotten better, and the measuring posts have moved as consumers' tastes have evolved. A lot. Given all that, we recently revisited the long time New Belgium standard bearer to see if it still measured up.

After being poured on draft at the Renaissance Hotel in Washington, DC, Fat Tire appeared a beautifully clear caramel color, with a thin head of white foam that left behind a surprising amount of lacing.

The beer smelled primarily of malt, but that was all; there was little else to notice about the beer's very mild nose.

When we drank it, we found the beer to be biscuity, alright, just like it states on the label.  But it was earthy, as well. This beer has a very particular taste that reminds us of no other amber ale we've ever encountered. It's highly carbonated, with a relatively thin mouthfeel for the style. We like it for its high sessionability, even if it does have some flaws.  But then again, don't we all?  B

Posted by farlieonfootie at Friday, March 29, 2013