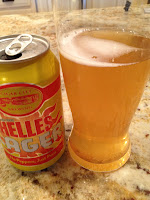 Upon witnessing Bayern Munich's recent 3-1 thrashing of the Arsenal, it seemed highly appropriate to review a Munich Helles Lager -- albeit one brewed a little bit closer than Bavaria.

(5.00% ABV) According to the information printed on the bottom of the can, this beer was canned on January 29th  -- and drunk less than three weeks later, on February 17th.   Hotter Than Helles was brewed by our friends at Cigar City Brewing, just up the road in Tampa, Florida, and poured from the can into a glass.  Upon settling, the beer appeared a brilliant golden/yellow color with a relatively thin head of foam.

The nose was yeasty and bready, and the beer smelled slightly of lemons.  The taste itself was fairly straight forward, and the mouthfeel refreshingly crisp. The beer tasted of toasted biscuit with some slight citrus notes, and ended on a slightly tart note -- the kind that keeps you coming back for more. This is definitely a beer we'd go back to, again and again. B+
Posted by farlieonfootie at Saturday, March 02, 2013