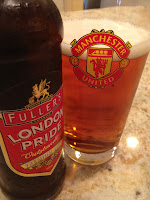 Although the irony of serving London's Pride in a Manchester United glass wasn't lost on us, we did it anyway. After all, we do what we want around here, much like the way they do  it at our favorite club.


Fuller's London Pride poured from the bottle a warm caramel-colored brown with a thin off-white head that stuck around longer than we thought it might. The beer smelled of sweet malt and brown sugar. There was a little bit of breadiness in there too, in keeping true to the style.

The beer's taste led with malt, but there was some nice floral hoppiness there in the middle, too. It was lightly carbonated to go down easily, which it did. We found the beer to be refreshingly simple and honest -- we consider it to be a great example of the style, and are happy to drink it almost any time: A-

Posted by farlieonfootie at Monday, March 25, 2013