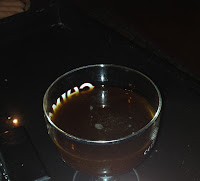 It's rare to talk about vintages when you're reviewing beers, but it's also fairly rare to find yourself drinking the number one rated beer in the world, produced by a very small Trappist Abbey in Belgium.  We drank the 2006 vintage of Westvleteren XII at a soiree thrown by Correspondent Ed the other night -- hey, that's just how he rolls -- and it didn't disappoint:

Westvleteren XII (2006) was poured into a Chimay chalice, and appeared prune juice dark with massive amounts of loose sediment floating around.  There was no head whatsoever on the beer.


The smell was of prunes, figs, raisins and other dark fruits.  The nose was boozy, almost like an aged rum.

Upon tasting the beer was very complex: there was just a lot going on.  It was all dark fruits and extremely complex, but velvety smooth at the same time.   The taste was malty sweetness, but mellowed, fruits with brown sugar, like a Christmas rum cake come to life in liquid form.  World class: A

Posted by farlieonfootie at Tuesday, March 19, 2013