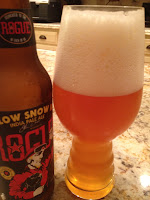 Before winter turns fully to spring, we needed to try this humorously named beer from Rogue, a favorite craft brewery based in Newport, Oregon, on America's west coast.

Yellow Snow poured a murky orange color with a massive head -- who poured this thing?!  The beer was poured from the bottle into a specially designed Spieglau IPA glass.

We found Yellow Snow to be on the mild end of the spectrum for an IPA. The beer exhibited some notes of sweetish malt and pine needles, but that was about it.

It was on tasting the beer that we got a better sense for it: it was bitter -- boy, was it bitter; like a wake up smack in the face. There was the taste of pine needles and grapefruit upfront, but the overwhelming impression was left by the bitter hops. The beer is lively and tingly on the tongue, so give it a whirl -- especially if you like west coast style IPAs.   B
Posted by farlieonfootie at Thursday, February 28, 2013