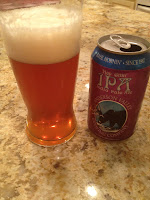 Poured from the bottle at home, Hop Ottin' was a deep reddish-gold color, almost purple in nature, with an absolutely massive off-white head. As the head receded, some decent bit of lacing was left behind.

The dominant smells of the beer were mild pine and citrus.

The malt was barely noticeable on tasting, as the hops dominated -- but in a very nice way. This particular beer is a bit sweeter than most IPAs, and doesn't have the ultra bitter finish that turns me off from a lot of its brethren. Hop Ottin' was nice and mellow, and exceptionally well balanced, with an oily mouthfeel testifying to the fact it's a true IPA.

Hop Ottin' -- from Anderson Valley Brewing in Northern California -- could well be my favorite IPA on the market. This is a "run out and get yourself some today" type of recommendation: A
Posted by farlieonfootie at Tuesday, October 02, 2012