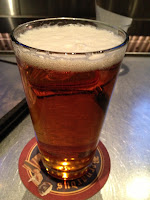 (5.0% ABV) Poured on draft at Yardhouse in Denver, Colorado, while out in that fair city for the 2012 Great American Beer Festival.  Produced by one of California's hottest breweries, Oaktoberfest was a crystal clear copper color, and arrived well carbonated with a small white head.

The beer's smell was extremely mild, with malt the only scent that really stood out.

This beer had an easy drinking malty, biscuity flavor.  Typical of most marzens, it wasn't overly complex, but this effort was rather more straightforward than I expected out of this top-rated brewery.  There was the slightest note of oak on the finish.

Overall, we would say Oaktoberfest is a good, but not great beer.  If they're offering, we're drinking, but we're not going out of our way to track it down. B

Posted by farlieonfootie at Monday, October 15, 2012