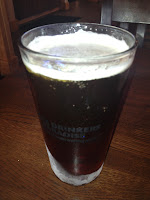 (4.50% ABV) Poured on draft into a pint glass in Lafayette, Louisiana. La-31 Boucanèe, produced by Bayou Teche Brewery and named in part for the French-Canadian slang word for smoke, appeared a clear copper color with a slightly off white head that left behind a better-than-average amount of lacing as the beer was drained.

The primary smell of the beer was caramel. Upon closer inspection, though, there was also a slightly sweet smokiness noticeable underneath.

Boucanèe was smokier on tasting than I expected from the smell, and the smoke flavor lingered nicely. On the downside, there was a light vegetal funkiness to the beer which I didn't love. The beer had a fairly light-bodied mouthfeel, one that was accompanied by plenty of carbonation to liven up the palate.

Smoked beers are not among my favorite styles, but this one would go nicely with barbecue on a hot Louisiana afternoon. B
Posted by farlieonfootie at Sunday, October 07, 2012