(7.00% ABV) Bottle 5027 of a limited 2012 release, from a company that practices farm to bottle brewing.  My understanding is that this means the brewery purchases all of the ingredients for this beer from one family-owned farm in Northern California. 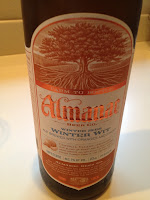 Winter Wit poured a cloudy orangish-yellow with a thick, fluffy white head. There was ample carbonation evident, even in the glass.

The dominant smell was of yeast, with a certain sourness also noticeable.  I also picked up some citrus notes, maybe lemon and possibly also ginger. 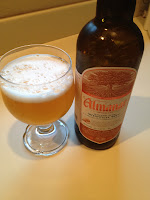 The beer had a mellow ginger taste, and the orange taste came through a little later, as well. It was a very nice balance achieved by the brewers between sweet and sour, a yin-yang kind of thing. Winter Wit was definitely more substantial than a breezy summer white, as if the brewers gave this one a very stiff backbone to stand up to those cooler Northern California nights. I like it: B+
Posted by farlieonfootie at Sunday, July 01, 2012