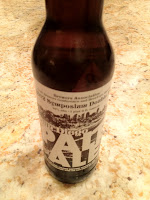 (10.00% ABV) Symposium was brewed by Karl Strauss Brewing of San Diego, California to commemorate the Brewer's Association 2012 Craft Brewers Convention, an industry-wide gathering that was held in the brewery's hometown earlier this past month.

Symposium celebrates the craft beer industry coming together once a year to meet and talk shop.  Each year, a brewery located near where the conference is being held is selected to brew a beer in conjunction with the local brewers guild and other industry participants. The 2012 edition featured help from plenty of industry insiders, including White Labs Yeast, Brewers Supply Group, Rahr Malting Company and a large bunch of others. Given the location, the group could little have selected a more appropriate style for the offering, choosing to go with an aggressively hopped Double IPA.

The beer is named "Symposium," which means -- as the bottle tells us -- "a convivial meeting for drinking, music, and intellectual discussions where ideas are freely exchanged."  Very appropriate.

Symposium pours a deep amber gold, the burnished color of an extra rich honey, with a fluffy white head of foam.  It was poured from a bottle specially created for the 2012 Craft Brewers Conference in San Diego into a lager glass. 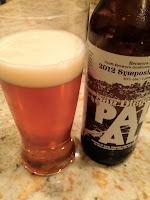 It's bready right off the first sniff. The sharp hop notes are softened by some light citrus and honey fragrance and the smell of pine needles.

This beer is incredibly rich, but fairly mellow tasting, although the pronounced hop flavor really lingers at the end. There's a fair amount of malt in the flavor profile, as well.  Symposium's high level of alcohol is definitely noticeable in the taste. There's somewhat of a medicinal twang to the beer right at the end, but this disappears as the beer warms slightly. It's solid: B+

Posted by farlieonfootie at Saturday, May 19, 2012