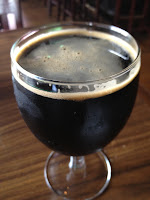 (8.2% ABV) I have this thing about Italian craft beer: I try it whenever I see one in the store or on a bar menu.  It's funny, 'cause most people thing of only one thing when they think Italian: Wine.  Not me, though.  I think craft beer, a space in which the Italians are real up and comers.  I spied this baby at a beer bar recently, and was mezmerized....

This thing is black as night....  Birrificio Del Ducato's Verdi Imperial Stout was poured on draft into a chalice, and showed up with a thin ring of toffee-colored foam lapping at the edges of the glass.

It has a very mild smell. There was a hint of chocolate and licorice, but they were faint, at best.

I got unsweetened chocolate and coffee on tasting Verdi. "Earthy" might be the best way to describe the beer.  This is significantly less sweet than its US-made Imperial Stout counterparts. The Italians love their bitters, and this beer doesn't disappoint. It's got almost an olive oil flavor to it -- relatively unique.

It's unlike any other imperial stout I've ever tasted: B
Posted by farlieonfootie at Saturday, May 26, 2012