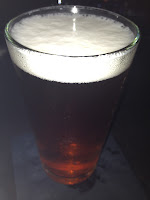 I was looking forward to this next beer from the very first time I read about Dogfish Head's new "in-between" seasonal, which also just happens to be a gluten-free beer.  Tweason'ale was designed to be released four times per year, in between this Delaware brewery's various seasonal offerings (think Chickory Stout, Aprihop, Festina Pesche, and Punkin Ale).  And so it was with great excitement that I spied it on offer recently at one of my local watering holes and determined to give it a go.

According to its release notes, Tweason'ale was brewed with a mild sorghum base rather than a traditional barley foundation, and offers vibrant strawberry notes, while also featuring the addition of a malty buckwehat honey.

Poured on tap into a pint glass, I found Tweason'ale a deep golden color, with a reddish tinge.  The picture above makes the beer appear a lot darker than it otherwise should -- what can I say except the lighting was fairly low in the bar where I drank it....   The pour also featured a reasonable sized head that faded quickly into oblivion.

Tweason'ale smelled sweet, almost like candy. The smell of strawberries was also clearly there.  The strawberry was a bit more muted in the taste, but still definitely there.  I also got some strong honey notes.

It's definitely different from most beers, and maybe lacking that certain bit of depth you might expect to find in a barley-based beer.  It was decently carbonated, maybe overly so.

Nevertheless, I like these guys: they consistently push the boundaries of how we should think about beer.  I could easily see where this would be refreshing on a hot summer day -- of which we have quite a few in Florida: B+

Posted by farlieonfootie at Saturday, March 24, 2012