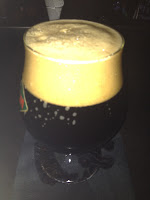 Porter has never stood out as one of my favorite beer styles, despite its association with George Washington and the American Revolution.  Nevertheless, I made a mental note to seek out Mary's Maple Porter from the Brooklyn Brewery when I saw it for sale, and I'm very glad I did.  In part I was enticed because maple syrup seems to be today's trendy beer ingredient, finding its way into more and more offerings, and it's easy to see why: it tastes damn good with beer.

Spotted on tap in Fort Lauderdale, Mary's Maple Porter was brewed with the addition of a decent amount of the aforementioned maple syrup, and its release notes say that the syrup brings out a "complex interplay with caramel, chocolate, and coffee flavors from [the] blend of roasted malts."

What I'll say is the following: Mary's Maple Porter was poured into a snifter, and appeared a solid dark brown.  The beer also featured a massive mocha-colotred head, as shown in the photo above.
The beer's smell was a bit difficult to pin down, but if pressed I would say it featured a subdued chocolate scent, with maybe just the slightest scent of hops also apparent.

It was sweet from the outset of the tasting, with a definite syrup flavor on the finish. I feel like I just had breakfast, but boy did I like it.  Mary's featured a nice bit of carbonation, which gave it a good mouthfeel, and made it easy to drink.  So much so that I wanted another...which I then had!: A

Posted by farlieonfootie at Saturday, March 31, 2012