Poured into -- what else? -- a pilsner glass at the Capitol Grill in Miami, Florida. This is probably grist for another column, but boy are the Capitol Grill guys way behind the times when it comes to beer selection.

Yes, they have Sam Adams Boston Lager, as well as Pilsner Urquell, Bass and Stella Artois, the latter three which likely satisfy the high end import crowd, but Amstel Light, Peroni, Heineken, St. Pauli Girl, Miller Lite, Coors Lite and Budweiser...?  Note to Capitol Grill management: it's not 1995 anymore. Have you heard anything at all about the craft beer revolution, in which American beer is at the very forefront...?  I've seen a better selection of beers at the 7-11 down the block. 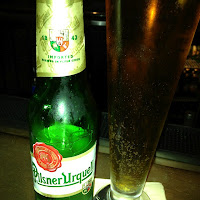 In any event, back to our beer: Pilsner Urquell poured a crystal clear and lively gold with only a modicum of head and a decent bit of carbonation. The primary smell was of a corny type of grain; the beer just smelled like a "mass produced" beverage to me.

Pilsner Urquell Tastes decent enough. It started out a bit sweet. I used to find this beer exceptionally hoppy, but after drinking a bunch of American craft beers I now found myself searching for the hops -- where the hell did they go?

I'd drink it over some of the other choices at Capitol Grill, but at a well-stocked establishment it wouldn't be my beer of choice:  B-
Posted by farlieonfootie at Sunday, September 02, 2012