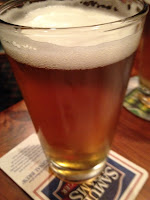 Scene: Hanging with family as the New York Giants pummel the Carolina Panthers on television in the background.  In need of a sessionable beer.

Appearance: Poured on draft at the Cloverleaf Tavern in Caldwell, New Jersey. The beer was a deeper brownish/gold than I would have thought for the style, but it was still an attractive looking brew. The serving had a thick white finger of foam on top, composed of large bubbles and soft white foam, which left behind some serious lacing.

Smell: There was a sour citrus smell noticeable.

Taste: Monkey Chased the Weasel began with a slightly tart, lactic sourness that transitioned into a citrusy sweetness before finishing with the taste of fresh berries.  It was light bodied and refreshing.

Overall: One of my favorite styles of beer, and Carton just about nailed this one. B+

Posted by farlieonfootie at Saturday, September 22, 2012