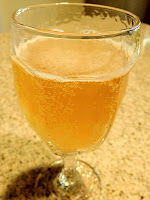 Last week we reviewed the Dogfish Head Saison Du BUFF, but this week it's time to turn our attention to the same beer made by the Pennsylvania leg of this unique three brewery partnership, Victory Brewing.  One of our favorite of all American craft breweries, Victory is based in Downingtown, Pennsylvania, and is known for their consistently excellent lineup of beers.  Their version of Saison Du BUFF is only sold in limited parts of the country, and -- interestingly enough -- only by the single 12 ounce bottle.  Herewith, our review:

(6.8% ABV) Victory's version of Saison Du BUFF was poured from the bottle into a wine glass. The beer was a clear-as-a-bell gold color, although there was virtually no head to speak of.  Given the massive amount of bubbles clinging to the side of the glass, this probably reflects more on the cleaning materials used at the hotel I stayed at than it does on the beer.  Which just goes to show lesson number one for the day: don't drink good beer from a cheap glass. 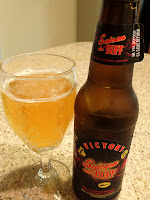 Du Buff smelled fairly mild -- I got more faint lemon than anything else on the nose.

This version has very little of pepper that I found in the Dogfish Head's release.  It's blunter, whereas the Delaware brewer's version seemed to show a bit more finesse. I'm not getting the individual spices -- rosemary, parsley, sage and thyme -- but rather a more blended taste of spice.  Victory's Saison Du Buff tastes "thicker," as well (if that makes sense). There's more bread and biscuit flavor here, rounded out by some drying lemon at the end. I'll give it a B.
Posted by farlieonfootie at Saturday, June 09, 2012