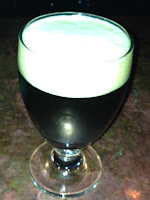 (8.0% ABV) With a name like Monk Suffers Serious Sugar Rush on Barbados, who could resist?  Seriously, though, I had never heard of Evil Twin Brewing until I happened by this bar that had it on tap.  And when I saw the name and the style -- one of my favorites -- I was hooked.  So here goes with my first Danish craft beer review:

Evil Twin Monk was poured into a smallish chalice -- $9, no less, for half a pint -- and appeared a dark brown color, with only the fat, toffee-colored head to distingush it in the relatively dimly lit bar.

It smelled a bit sour at the outset, almost like a whiff of vinegar, but that quickly passed, and I was soon nose deep into a bag of Dixie Sugar Crystals -- it smelled like pure cane sugar.

The beer tasted of coffee, fueled with pure, undiluted sugar -- like I was mainlining it. Monk Suffers Serious Sugar Rush was highly carbonated, and ended with a nice -- you guessed it -- sugary finish. I feel like I just swallowed a whole packet...!

The alcohol became more noticeable as the beer warmed.  I liked it -- nice job.  I need to get to Denmark.  Or Barbados....  B+
Posted by farlieonfootie at Monday, June 04, 2012