More of the sites and sounds of a pre-match London:

o Well, the weather is doing its level best to cooperate for the weekend's festivities.  What started out as a gray, gloomy and chilly day has ended in near perfection, the sun finally peeking out from beneath the clouds and the climate becoming more temperate by the minute.  If we can just keep it this way a bit longer....

o What was the guy in line next to me at customs thinking when he told me my football warmup jacket should be blue? Maybe I have this wrong, but didn't Manchester United beat Chelsea four times this season?

o Is it just me, or does it sound slightly suggestive every time the recorded female voice on the Underground announces I'm headed toward "Cockfosters?"

o I saw a one lonely dude on the tube wearing a Spurs jersey, the first time this trip I've seen any Tottenham presence in London.

o Man United kits were flying off the shelves this afternoon at Lilly White's Sporting Goods store in Picadilly Circus. The only pre-printed ones had Wazza's name on the back, so I have to return tomorrow pre-game to pick up my brand new #9 Berbatov shirt.

o I found a proper English pub to have an after-work pint, cooling my heels and slaking my thirst at The Nag's Head.  Definitely recommend dropping in if you find yourself in Knightsbridge. 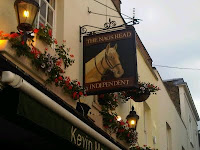 o Somehow after dinner I ended up in a nightclub that had this weird Pakistani/Russian vibe going on, the spinning tunes vaguely reminiscent, but with a middle eastern twist to them.  Not a lot of football spoken there, though.

o The next place I ended up at did speak football, as I engaged in a spirited conversation with the bouncer regarding Arsenal and their lack of recent silverware.  "Next year," he's convinced.  He's rooting for Barcelona, by the way, so I dismissed his rantings as just that.

o Wearing my United warm up jacket, I was stopped by numerous people for fist bumps and high fives.  I definitely saw more United fans than Barca fans out and about, but the Barca fans made themselves more apparent than the United faithful, with most dentifying their alleigance by wearing a scarf.

o Overall, I'd describe the atmosphere in London on the day before the big game as relatively low key, and often hard to tell there's a big game about to be played.  London's obviously a big city, with lots to do and multiple events competing for your attention.  I'm certain today will be different, though, the closer we get to kick off, and especially as I board the tube to get out to Wembley.  That's when the real atmosphere and nerves will kick in.

o I'll be tweeting live updates from my Twitter account all afternoon and evening, and have an unbelievable surprise planned if we win.

Posted by farlieonfootie at Saturday, May 28, 2011