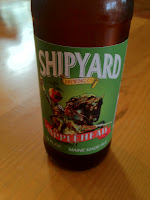 (4.50% ABV) I'd seen this brew advertised in several of my recent beer publications, and figured it had to be a Springtime counterweight to Shipyard's successful Fall offerings. As a result, I thought I would try to get a bit ahead of the season and sample some Applehead -- all for your benefit, of course, dear reader.


I poured Applehead straight from a 12 ounce bottle into a modified pilsner glass.  It's a bold and brassy gold color, with a slightly tannish head that quickly fizzles away without a trace. The beer actually appears very similar in color to its more popular children's tipple, apple juice. 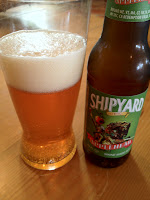 The fruit promised in the name doesn't disappoint in the beer's smell, as the apple scent is front and center.  There are some slight cinnamon spices and a bready smell, as well -- it's actually very reminiscent of apple pie.

On tasting, the apple and spices are there, too, with the cinnamon especially reminiscent of the pumpkin spices in Shipyard's Fall beer. Applehead has a thin, malty backbone, and a certain buttery goodness.  Its crisp, and not overly sweet.

It's definitely unusual -- probably not my everyday first choice -- but likely a decent call on a hot Spring or Summer afternoon. B

Posted by farlieonfootie at Sunday, February 19, 2012