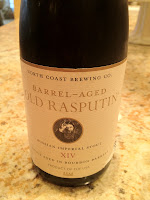 (11.5% ABV)  It's a Big Game tradition: the first time I tasted the Anniversary Edition of this world-class beer, it was during the Super Bowl two years ago.  As a consequence of that fateful night, I've been on the lookout for it again ever since.  Having learned from North Coast Brewing's Twitter account of its recent release, and with Super Sunday drawing close, I stepped up my detective efforts to locate the barrel-aged version of Old Rasputin, Anniversary Edition XIV.  Although I was ultimately unable to locate it nearby, I did manage to track down a bottle at BX Beer Depot in Palm Beach County, Florida-- a not inconsiderable distance from the farlieonfootie tasting room.

I finally popped open the bottle during the Big Game earlier this week, and it didn't disappoint: I poured Old Rasputin XIV into a Riedel "O" Series tumbler, and beheld the deep, dark chocolate brown sight of it, with its massive toffee-colored head that lasted a good, long time.  The 14th Anniversary Edition smelled heavily of bourbon and licorice, fueled by booze. Just on smell alone, it was evident that this was going to be a massive beer, a real beast.

On tasting, I got rich, boozy chocolate, like a bourbon-soaked chocolate chip. There was also just the slightest hint of vanilla flavor, likely from the oak barrel aging, that rounded out any potentially sharp edges from the 11.5% alcohol.  The beer had a nice malty depth to it, and a medium- to full-bodied finish.  It packs a serious punch -- this is definitely a sipper, and one you're going to want to share, unless you like waking up on the floor.

I'd love to see how this one ages, but I was only able to find a single bottle this time.  That sad news was tempered by two pieces of better fortune: the Giants' fourth Super Bowl title is now in the bag, and the friend that I shared the bottle with on Super Bowl Sunday let me in on a little secret -- he still has a bottle of Anniversary Edition XII hidden away for a later date. A

Posted by farlieonfootie at Wednesday, February 08, 2012