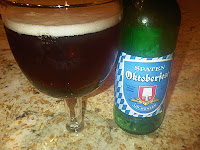 (5.90% ABV) Spaten Oktoberfest pours a translucent brownish-red, kind of like weak iced tea, with a thin white head that's gone before you really notice it. I get alcohol on the nose, which is strange for a beer clocking in at less than 6 percent. I also got malts, which you'd be right to expect from a marzen.

On first taste, I'm getting thin malts -- it's rather biscuity, in fact. Spaten also has this herbal, astringent thing going on, too, which is a bit unfortunate in my opinion. It's a vegetal bitterness that just won't go away -- it's definitely part of the aftertaste, which extends for quite some time.

This beer is eminently drinkable, although nothing special, and certainly not my favorite of this year's crop of Oktoberfest beers. It's probably best suited for under a tent in Munchen. B-.
Posted by farlieonfootie at Friday, October 28, 2011