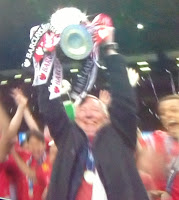 Overseeing a development he had witnessed dozens of times in his illustrious managerial career, Sir Alex Ferguson saw his side notch a late winner to overcome a determined visiting side at Old Trafford, defeating Swansea City 2-1 on an 87th minute Rio Ferdinand goal.  The defender's score capped off a day filled with raucous celebrations in Manchester and all over the globe, a day marking not only the Champions' 13th Premier League title, but -- perhaps more sentimentally -- the end of the most remarkable managerial career world football has ever known.

If both the spectators and the players began the match with lumps in their throats, the players for both sides soon put their game faces on: Chicharito hit the underside of the bar to get the action underway, and with Phil Jones losing his footing at an inopportune moment, it was only lady luck that denied the Red Devils a lead within the first five minutes.

Nine minutes later and Swansea defender Chico Flores' used his body to keep Hernandez from testing the Swans' 'keeper yet again, as United continued to exert pressure on the visitors.  Paul Scholes -- as he has been so often in his career -- was once again at the center of United's movement, but by the 25 minute mark there was still no joy for the home side.

United were denied a decent penalty shout in the 32nd minute as Shinji Kagawa was felled in the box by Neil Taylor, but referee John Moss wasn't convinced -- even as Sir Alex looked on expectantly from the sideline.

It was Hernandez, though, who always looked the most likely, and he finally slotted the home side in front shortly before halftime, pouncing on a loose ball in the box as he has so often, the ball finding its way to the Mexican's feet as if by magic after a Robin van Persie free kick bounced fortuitously around in the Swansea end.

The visitors began the second half with some early pressure -- pressure that paid off quickly as Michu equalized the scoreline at one with an outstretched boot that left David De Gea with no chance at all.  Rio Ferdinand drove Wayne Routledge just hard enough to deny the Swans' midfielder from adding to his side's lead in the 53nd minute, as the visitors asserted their credentials by out-hustling the home side in a spirited second half performance.

De Gea did well to deny an offside shot on the near post as the Swans continues to crash Sir Alex's farewell party, and Phil Jones was forced to use his body to block Flores from point blank range and keep the game deadlocked.

Anderson replaced Paul Scholes in his final home performance, the Englishman characteristically running off the pitch as fast as his legs would carry him to avoid the spotlight which inevitably followed.

The home side amped up the pressure with 20 minutes to go, the search for a winner becoming slightly more important as time continued to disappear from the clock. Ryan Giggs replaced Chicharito with just under 15 minutes left to play: the final substitution of Sir Alex's home managerial career fitting, as he brought on the closest thing the League has to a living legend.

Although it was a battling Swansea side that looked more likely to break the deadlock in the game's closing moments, the end -- as it has been so many times under their current manager -- was classic United: Ferdinand scoring his first goal in five seasons, finishing Van Persie's 87th minute corner with all the aplomb of a seasoned striker to send the crowd into ecstasy and set off the post-game celebration in earnest.