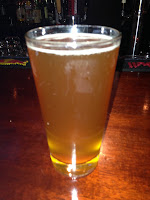 (5.30% ABV) Poured on draft during a recent trip to Virginia Beach, Virginia -- a beach so nice they named it twice....  The beer was poured at the bar at the Hilton Hotel on the beach, which was hopping for a recent weekday night.

Our initial thought was that the beer gave off a banana smell -- we're not certain, but we're thinking slightly off-style for a saison....  But we also found pears and apples on the nose.

Alter Ego had a medium mouthfeel -- not too viscous -- and was well carbonated.  Zesty, in fact, with a lot going on in the taste department -- citrus and spice predominating. It was sweeter than many saisons we've drunk, but still -- we liked it: B

Posted by farlieonfootie at Wednesday, May 15, 2013