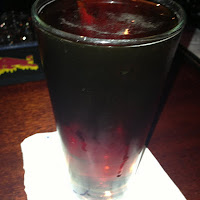 (6.00% ABV) False Cape Amber Ale was drunk on draft in Virginia Beach, Virginia during American Craft Beer Week.  By the way, there is a nationwide toast to Craft Beer Week tonight, May 16, at 8pm EST / 5pm PST -- so now that you've been warned, be prepared to take up a glass.

False Cape Amber was poured with absolutely no head, as pictured above.  The beer was produced by a very small brewery in Virginia Beach -- so small it doesn't even get mentioned yet on Beer Advocate.  It was true to its promise as an amber ale -- the deep amber copper color came though even in the semi-dark environs of the bar at which we enjoyed this beer.


False Cap Amber had a mild smell; in truth, the maltiness was the most apparent aspect of the nose.

The beer's overwhelming taste was of a musky, muted chocolate, and it struck a nice balance between malt and hops.  This beer is a direct descendant of New Belgium's much celebrated Fat Tire.

The mouthfeel was medium, and the beer was well carbonated.  Nicely done: B+
Posted by farlieonfootie at Thursday, May 16, 2013