It's Hard to Say Goodbye 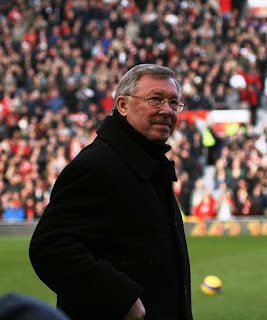 We thought about showing a Manchester United flag on our website, and playing martial music as if we were a communist country that had just lost its Dear Leader, but we rejected that. Fergie always said the club is bigger than any one person, and we're about to see if it's true. Like Sir Matt before him, Sir Alex Ferguson is leaving the building, and no one is quite sure what will come next.

Instead of writing something mawkish and dreary, lamenting our loss, we at farlieonfootie would rather focus on celebrating what we had -- how good it has been during the 'Alex Ferguson era' at Manchester United. So we're re-publishing something we wrote two seasons ago, in full.

Because we still can't say it any better:

In anticipation of the game Sunday, I was reading a piece by Daniel Taylor in The Guardian yesterday in which he alluded to an interview conducted recently with Kenny Dalglish. While talking about the bitter rivalry between Manchester United and Liverpool, the Anfield head man admitted to a sense of regret over United's ascendancy in recent years:

"I never considered they would catch us," [Dalglish] admitted.  "You take greater satisfaction from when your own team is successful, and [Manchester United have] been more successful than Liverpool over the past 20 years."

The quote got me to thinking.  Nothing in life is guaranteed, and those of us fortunate enough to be fans of Manchester United have had it pretty good of  late: 11 League titles, five FA Cup trophies, two European Champions League titles and a bunch of other awards and honors (35 in total) during Sir Alex Ferguson's time in charge alone.   That's quite a haul by any stretch of the imagination.  Laissez le bon temps rouler, as they'll be saying next week in Louisiana.

And it's tempting to think it'll go on forever.  I'm certain it must have felt that way to Liverpool supporters in the '70s and '80s, good times continually abounding, the League title coming back to Anfield 11 times in that 20 year span, and the next one seemingly always right around the corner.  But nothing lasts forever.

Which is why I'm sitting back and really enjoying this season.  Appreciating it not only for what it is, but for what it may still become.  Because one day it'll be gone.  This is not meant to be a work of doom and gloom, a piece to make all United fans sad -- "Remember, man, you are dust, and to dust you shall return."  We'll save that particular downer for Ash Wednesday next week.

No, this is rather more of a "Stop and smell the roses" piece, thanking the heavens above for Sir Alex and the current crop of Reds.  We have the best team in England -- fact.  We've won the European Cup twice in the past decade, and expect to challenge for it every year, including the present one -- fact.  We expect (not hope) to win every game we play, and are bitterly disappointed when it doesn't happen -- fact.  Not many fans of many teams in any sport the entire world over can state the truisms that we as the United faithful can.


But we can.  And we can do it because of the stability of the club, the tactics of the manager, the eyes of the scouting department and the skill of the players on the pitch.  It's a virtuous circle, a positive feedback loop, a steely resolve and a winner's mentality.  And much of it emanates from the man in charge.  He's never satisfied, and not the type to look back in the rear view mirror or sit around with friends talking about the old days.  No, Sir Alex is a visionary, constantly looking forward, and continually driving on toward the next challenge.

And he'll be damned hard to replace when he calls it quits.  I hope it's not anytime soon, because the club is bound to go through a rebuilding phase no matter who is in charge.  Even if its The Special One. It's inevitable, even if we don't want to admit it.  And it doesn't necessarily mean the good times will never come back, it just means that there may be a pause -- and hopefully it's a short one.  Much like the New York Yankees in Major League Baseball, the Boston Celtics in the National Basketball Association, or the Pittsburgh Steelers in the National Football League, the Red Devils have become a team for the ages, competing for titles in different eras under different men and with different tactics.  But the core is still identifiable, it's still United, and it's a team we and our children and our children's children can and will love.

So sit back United fans, and enjoy what we have.  We may never again have it so good.  These are the salad days of a storied franchise, and we're alive to see it.  This is not like reading about Tinkers to Evers to Chance, or seeing some grainy footage and scarred black and white photos of the late great Ty Cobb:

No this is about Sir Alex, Giggs, Scholes, Rooney, and Berbatov, Vidic and Ferdinand, Nani, Chicharito and Van de Sar among other.  Live, and in living color, coming to a Theater of Dreams near you.  This is about football, and about the famous Manchester United football club.  This is about all of us, and how much we have to be thankful for, right now, at this very moment

This is farlieonfootie wishing good luck and God speed to Sir Alex on May 9.

Posted by farlieonfootie at Thursday, May 09, 2013