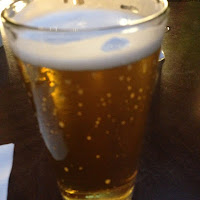 (4.70% ABV)  Poured on draft at the Sheraton Westshore in Tampa, Florida.  The beer was served in a glass that still retained a film of dishwater soap on certain spots -- thus the bubbles sticking to the side of the glass in the photo above.

The beer itself was only mildly more impressive than the appearance of the glass.  Florida Avenue Ale wasclear gold color and smelled ever so faintly like grain. Overall, the beer offered only a very innocuous smell.

The taste followed the nose with the exception of a slight citrus/lemon note at the end.  It contained lively carbonation, but the beer had a very thin mouthfeel.

Overall, we'd have to say this beer was truly nothing special -- a beer like this won't convert many to the craft beer revolution: C
Posted by farlieonfootie at Sunday, May 05, 2013