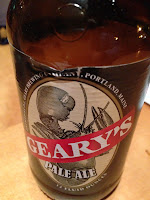 Poured from the bottle at Legal Sea Foods in Boston, Massachusetts.  The setting was the end of a beautiful New England spring day - sunny and mild, with temperatures in the upper 60s.  Legal Seafoods is located less than a half a mile from where the Boston bombings occurred two weeks ago -- a site that we visited yesterday to pay our respects to both those departed and those injured by the terrorist actions.

Geary's poured a copper orange/brown with a full white head.  The beer smelled of malt, fruit and bread.

It's a medium carbonated, medium mouthfeel beer.  Fairly traditional malt flavors dominate.  There's nothing out of bounds here -- these guys are plowing familiar ground, but they do it really well.  B+

Posted by farlieonfootie at Thursday, May 02, 2013