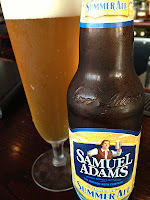 Memorial Day is the traditional kick off to summer here in the United States -- even if the weather in the northeastern part of the country will make it feel more like a rainy spring weekend....  But that's of no concern to us, as we live in Florida, where summer is well underway.  And we've managed to get a good head start on the beers to try this season:

The first of these was Sam Adams Summer, which we tried when it was poured at Morton's steakhouse in Fort Lauderdale. The beer arrived a nice copper color with a beautiful, thick head, as shown above

Sam Summer was all mild hops and citrus on the nose.  The beer initially started off dry and while the wheat shone through, it finished with a nice lemon twang. It was very refreshing; and even though it's not officially summer yet, when you have one of these in your hands it feels like it should be....  B