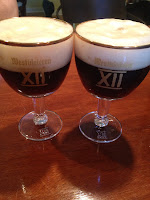 Introduced to much fanfare around the United States in December 2012, a very limited amount of Westvleteren XII was sold through select number of retailers on a one-time-only basis to raise money for the construction of a new abbey in Belgium.  Not just any beer, Westvleteren XII just so happens to be the number one rated beer in the world -- not because we say so, but because reliable sources around the world say so.  We reviewed an aged version (2006) of the beer a few weeks ago, and recently we found some time to take a peek at the monks' latest effort:

The beer was poured into a Westvleteren goblet at the home office, to celebrate Correspondent Ed being out on the road.  Westvleteren XII was a dark brown, root beer color, with a massive, uneven head of foam that stuck around and around.  And around.  One of our tasters commented that the beer's head reminded him of the ungroomed terrain of a alpine ski resort.

The beer's smell was rich and boozy, with a slight sour yeast undercurrent. Upon taking a sip, we found the beer surprisingly well carbonated at the outset.  Gradually, however, the carbonated mouthfell morphed into something decadently rich, even creamy, as the bubbles settled down.

We could tell you that it was rummy, with dark fruits and spices, but we'd be underselling it.  The taste can perhaps best be described in one word: complex.
Get some -- if you can find it. A+
Posted by farlieonfootie at Wednesday, April 03, 2013