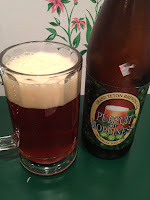 Pursuit of Hoppiness was poured into a clear glass mug, and appeared a thick amber color, true to its promise, with a massive off-white head composed of millions of tiny bubbles.

The beer had a very hoppy, rich smelling nose.

It was maltier than we expected up front, and pleasingly bitter on the back end, with a drying grapefruit and pine taste.  Pursuit wasn't nearly as hoppy as we'd been led to believe after reading the label -- right up until the bitter finish. It was the first beer we've had from this brewery out in Idaho, and we'll give it a B+
Posted by farlieonfootie at Thursday, April 04, 2013