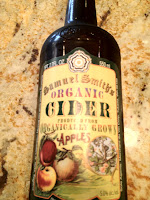 Let me begin by making an admission: I really like ciders, especially on a hot day -- of which we get quite a few in Florida.  Or after a hard day's drinking, for a change of pace. Or both.  You show me a cider, I'll show you what I'm going to be drinking some day soon.

And it's a good time to be liking ciders -- it seems as if everyone and their brother is getting into the cider business these days.  Miller Coors' recent purchase of the maker of Crispin Cider hints at that trend, as will Boston Beer's and Michelob Ultra's new offerings.

I've heard from my brewer friends that ciders are much easier to make than beers -- it's almost like cheating, they've said to me. Well, a lot of breweries are going to begin cheating, then, because the US's thirst for cider is just starting to take off. Or should I say "return," for alcoholic cider featured prominently in our revolutionary history...?

Samuel Smith's Organic Cider poured a paler yellow than I expected -- a "straw yellow," if I had happened to read the bottle, which I didn't until after I completed my review.  And even though it's not a beer, it looked a lot like your typical "yellow fizzy stuff" beer, with a pearly white head that disappeared before I could really capture it. 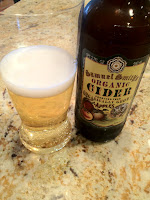 The cider's smell was faint, bready apples, and maybe a funky sourness, almost hitting some vinegary notes.  The apples were definitely there in the taste, and they were delicious, and fairly well balanced. The cider wasn't too sweet, in fact, it was a bit tart.  It has a very nice, lively mouthfeel -- pleasantly bubbly on the tongue.

I didn't love it -- a bit too much sourness for my taste -- but I wouldn't turn it down if offered: B
Posted by farlieonfootie at Sunday, April 08, 2012