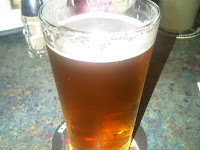 (5.90%) ABV.  Old Thumper pours a light, reddish-tinged yellow, somewhat deeper than a golden color. I drank the beer on draft at the Jetport in Portland, Maine during a recent flight delay. Old Thumper on draft has very little smell: I got very vague, mellow hops, and a slight wihiff of apples on the nose. It was, however, a very easy drinking beer.  It's fairly sweet, with a ciderish taste up front that ends up in a dry, smooth finish.

I've had this beer several times before, but I liked it this time better than I remembered -- maybe it's because it was on draft, whereas the majority of times I've had it before were from the bottle.  Either way, I could easily drink this one all day long. B+
Posted by farlieonfootie at Tuesday, September 27, 2011