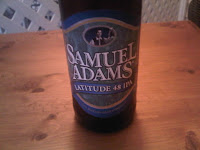 (6.00% ABV).  I haven't seen this for sale before, so I was looking forward to trying it more than I typically look forward to Boston Beer's offerings.  Not that I don't like them, but Sam Adams has become the most "coprorate" of the craft brewers, based on my unscientific sense of size and corporate attitude, and so I'm rarely as jazzed about having a Sam as I am about something from some brewer a bit smaller and more daring.

Drunk from a bottle (due to the lack of an available cup) while on a recent trip to New England, Latitude 48 IPA was mildy hoppy on the nose, although it's hard to say how it would have smelled if it had been properly poured into a glass, so don't hold me to this.

On tasting, the beer was more citrusy than hoppy, almost like a dumbed-down IPA for the novice beer drinker. I am getting strong grapefruit and mild pine, though, kind of like Boston Beer was teasingly trying to mix my home state of Florida with the tall pines surrounding our bed and breakfast in Maine. The prototypical Sam malts are identifiable up front, as well.

It's decent and different, and it didn't give me an immediate headache like many other IPAs, so I'll give it a B.
Posted by farlieonfootie at Friday, September 16, 2011