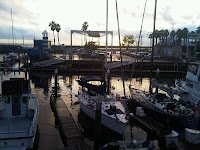 A slight departure from the norm today, as the footie news is slow, and the beer (and weather) in Southern California is cold. Enough said -- I'm going way off the reservation here:

I had a few hours to kill on a recent overnight at LAX (that's the Los Angeles airport for those of you not living here in the US) so I decided to check out one of the local beer joints. (Actually, it was either that, or go to see Marilyn Monroe's crypt and attempt to steal some flowers for Correspondent Ed, who -- it turns out --has some sort of sick fetish with Marilyn; something involving dressing up in a Some Like it Hot costume, but I couldn't bear to hear all the details.  Ed also has a crush on Merv Griffin, who's interred nearby, but we'll save that story for another day.).

In any event, armed with my trusty research from Beer Adocate, I ended up at Naja's Place in Redondo Beach, as much for the fact that it sits on the pier overlooking some boats and the Pacific Ocean as for its recommended beer selection, with 78 taps in all.

There were a few things I noticed on my way to Naja's.

First: the Song "It Never Rains in Southern California" is based on a lie. It was pouring when I drove to Naja's. In truly tantalyzing Southern California style, though, the fading sun arced through the clouds and sat resting gently on the horizon as I arrived. And there's nothing like a west coast sunset.


Second, the traffic in Los Angeles is terrible. Really bad. I know this is a cliche, but it's true, so I'll repeat it anyway. I was inching along in my car on the 405 for like an hour (ok, maybe it was fifteen minutes, but it was a long fifteen minutes). When the traffic started to break and I finally got going, I looked down at my speedometer to make sure I wasn't speeding. I wasn't; I was going 30 MPH. Only in California could that pass for speeding.

And then I arrived, if you can use that word to describe the entrance to Naja's. It's on the lower level of the King Pier in Redondo Beach, hidden away in the corner.  It's a divey joint, and open to the cold outside air, with a door or two left gaping to the sea. AC/DC was playing ultra-loudly on the juke box when I entered ("Done Dirt Cheap," with Angus Young wailing away, for those of you wondering). It's a local joint. The headbanging music continued throughout the evening -- after a few beers I could actually feel my thin hair begin to grow again, as the 80's hairband music continued to pump out and beat itself into my skull.


And one other thing: it gets cold in California. People forget it's the desert. Those Mexican poncho/hoodies you see people wearing?  They designed them for a reason: you need one to keep warm. I didn't have one, so I tried to drink some heat into my body.

I saw lots of hoodies at Naja's. Jackets, sweatshirts and even a knit ski cap or two, as well. Me?  Long sleeve cotton t-shirt. F'ing freezing. My fingers were so numb I could barely type the beer reviews you're about to read. In addition, I was only slightly distracted by the kid at the table next to me talking about the sexts how he's received from a bunch of hot, 20 year old women, who he then proceeded to describe in glorious detail (call or tweet me if you want more). Meanwhile, I'm trying to pay attention to my beer. Really -- I tried. Tomorrow you'll get the reviews .  I promise. We'll break new ground -- it'll be an epic day for beer reviews.

This is a thirsty farlieonfootie for March 24.

Posted by farlieonfootie at Thursday, March 24, 2011