(7.00% ABV)  633 Pale Ale poured a honey brown with no head. It was drunk from a clear plastic cup while sitting outdoors at a New England clambake during a fabulous afternoon spent on Cabbage Island, Maine.  The spectacular setting, and the delicious feast of lobsters and steamers could have marginally influenced our opinion here, but those are the kind of risks we take for you daily here at farlieonfootie in order to bring you the very best from the worlds of footie and craft beer.

﻿
Before we get to the review, the story behind the beer is fairly interesting, as well: although the Boothbay Craft Brewery is a relatively small operation -- emphasis on the word small -- it has some rather big friends in the craft beer industry.  Sam Calagione, the founder of the Dogfish Head Brewery (as regular readers of this space know, Dogfish is one of our absolute favorite American breweries for its delicious beers and no-holds-barred approach to brewing) spent many of his formative summers in and around Boothbay Harbor, Maine.  Due to his love of the area, Sam repeatedly returns to the area on family vacations.

Somewhere along the way, Sam got to know the founder of the local craft brewery in Boothbay, and has given him an active helping hand in getting the operation off the ground.  In fact, on a recent Friday in August when we visited the brewery, we witnessed Sam deep in conversation with the team at Boothbay, proving two things: 1) he's a loyal friend who's still helping out; and 2) some of Sam's advice must be working, because the beer is damned good.   Staying true to their local roots, the brewery's flagship beer is called 633 because those three numbers are the telephone prefix for Boothbay. 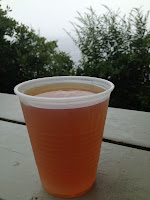 633 had a nice floral smell on the nose.  On tasting, the beer started out a bit sweet with some beautiful floral notes, then evolved into something a bit stronger and hoppier in the middle, before fading into nice, mellow finish.

It was exceptionally well balanced, and dangerously sessionable for a 7% ABV pale ale.  Definitely try it -- if you can find it. A-

Posted by farlieonfootie at Thursday, August 23, 2012