o Giggs with the PK.  Finally, someone who knows how to take 'em...

o United 1 - Fulham 0 inside of three minutes. This game is #Over.

o Can we have an easy game for once, please?  I've worn a path in the carpet pacing back and forth these last few weeks.

o Chicharito just knocked over Schwarzer as if he was made of paper. Has the Little Pea been bulking up?

o Surely that's a second hand ball?!  Clattenburg's got to be blind not to see it.

o Fulham's defense makes United's look like world beaters. Hot knife through butter doesn't begin to describe how easily United are going through their back line.

o The Welsh Wizard still has his moments of pure brilliance. You can't hide class.

o It must be wonderfully easy to be a football commentator.  If only Fulham had a bit more "belief" they'd be in the game. Who knew it was that #Simple?

o That's the way, Wazza. It's an awful long way back for Fulham now... #TwoNil

o Oh, goody. Scholes coming on for a tackling seminar.

o Fulham look dreadful. Something tells me that they'll give us a tougher game in London next weekend, though.

o Just a question of how big the final score will be now. #ChicharitoBrace

o It's really saying something when you're getting beaten 4-0 and your best team's player is the goalkeeper.

o There goes the #Shutout. Poor defensive marking from Rooney.

o Giggs looking a bit like Voldenoort with the hoodie on, no? 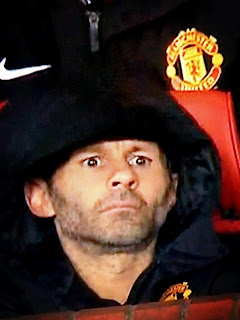 This is farlieonfootie for January 27.

Posted by farlieonfootie at Sunday, January 27, 2013