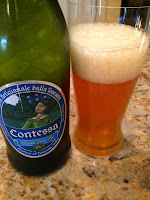 (7.00% ABV) Poured at the home office from a 22 ounce bomber on a lazy weekend afternoon. Contessa appeared a hazy orange/gold color with a massive head of soapy white bubbles. The beer was so well carbonated that some of the foam made its way out of the bottle even before the beer made it into the glass.


The beer displayed grass and lemon notes on the scent. The citrus notes made themselves apparent as soon as the bottle opened.

It was fizzy on the tongue, and just bitter enough on the finish to keep the initial lemon and floral freshness honest. It's nowhere near as bitter as some of the west coast hop bombs that currently rule the American scene, but we loved it nonetheless.

Contessa was highly carbonated and very light on the tongue. The beer was seriously refreshing: why anyone would choose to drink a macro beer over something like this little Italian gem is beyond our comprehension. A-

Posted by farlieonfootie at Sunday, October 13, 2013