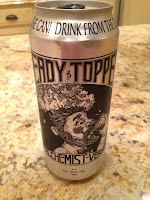 (8.00% ABV) To paraphrase U2, there's been a lot of talk about this next beer, maybe, maybe too much talk. We decided to see what the Heady Topper madness was all about, and discover for ourselves if the Vermont-based beer lived up to the hype.

Heady Topper was drunk from the can, as instructed. Okay, we cheated a bit, and poured just a teeny bit into a glass so we could see what this baby looked like. The rest was drunk from the can, as instructed right at the top -- we promise!  Ok, truth be told, we actually drank this beer from a glass, but it was a specially-designed glass -- one suited for IPAs, and designed by none other than Dogfish Head and Sierra Nevada, both of whom know a thing or two about beer. So much for following directions, but then again we've never been too good about that....  Despite the instructions, we recommend drinking it from a glass if you have a good one.

The beer was a hazy light yellow color, and came with a head that was white as the driven snow and just didn't want to leave. The smells of hops and pine resin were almost overwhelming, amazingly concentrated. The hoppy bitterness made itself apparent right away upon tasting, but it wasn't overwhelming. It stays there throughout the entire taste, but this beer was much smoother than many IPAs we've had over the years.

Heady Topper's mouthfeel was moderate, as was its carbonation.  It may not be the best beer we've ever had, but is is very well balanced and quite delicious. A

Posted by farlieonfootie at Sunday, October 20, 2013