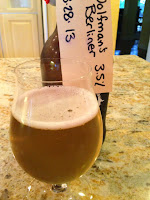 (3.5% ABV) Poured from a growler into a tulip glass one hot summer weekend (aren't they all in Florida?). Wolfman appeared a clear-as-a-bell straw color with a whispy thin white head that was gone before we could even properly take note of it.

The beer smelled most profoundly of wheat, with some slight funk thrown in at the very end.

It was easy drinking all the way, and not as sour on first grasp as one might have expected. The wheat shone through on the initial taste and never really left. The beer was sparkly on the tongue and a real thirst slaker.  We love just about everything produced by this small Dunedin, Florida-based brewery, and this effort was no exception.  A-
Posted by farlieonfootie at Monday, October 14, 2013