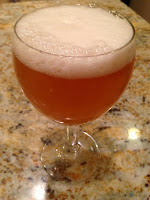 (5.00% ABV) Poured from a 12 ounce can while watching a sumptuous night of  Cup qualifiers. Florida Cracker -- an oft-misunderstood term in today's world, but one that originally referred to the crack of the bullwhip used by old time Florida ranchers to drive their cattle through the dense undergrowth of the peninsula's backwoods -- appeared a murky gold-orange color, with a thick head of soapy white bubbles that dissipated rather quickly, leaving virtually no trace behind.

The scent of citrus and Belgian yeast were immediately apparent on the nose. Orange notes in particular stood out when lifting the beer up close for a smell.

The beer displayed plenty of clove on the initial taste, but it faded rather quickly and was subsumed by the orange flavor and a certain peppery spice.

The beer had a light mouthfeel with plenty of carbonation. All in all, Florida Cracker is yet another stellar  effort from one of our very favorite breweries. B+
Posted by farlieonfootie at Wednesday, October 16, 2013