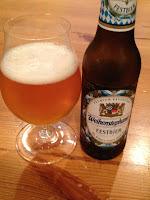 (5.80% ABV)  Continuing with our Fall beer theme, we'll head back to Germany for an offering from one of Germany's oldest brewers, Weihenstephaner's Festbier:

Festbier appears a clear golden color, almost a crystal-clear, brassy gold, with only a small whitish head that quickly fades away into just a memory. The smell reminds me more of a Pilsner than anything else.

On tasting, I'm getting some straw, and just a hint of yeast, followed by a fairly sweetish malt finish.  This is your classic German beer, although I don't quite understand why it's labeled a festbier, or treated as a Marzen -- 'cause if it is, it's like no other Marzen I've ever had.

What it is, instead, is a perfectly carbonated, well-balanced and refreshing beer, and one I could drink all day long -- in the Springtime. I'm wondering if Weihenstephaner is playing a Halloween trick on us, the drinking public, with the release of this beer in the Fall.

It's fairly decent, but it's not an Oktoberfest beer. B-, more for being off-style than anything else.
Posted by farlieonfootie at Wednesday, November 02, 2011