Too Soon But Thickening: Liverpool 3 - Southampton 0 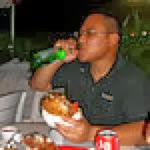 Scott is enjoying himself, almost as much as this guy here:

Still too soon for title talk, but the win over Southampton at St. Mary's bode well indeed. Not that the score line accurately reflected the run of play. For most of the first half it was the home side who was firmly on the front foot forcing clearances and saves aplenty from the scrambling Reds. Only a fortuitous bounce to Luis Suarez, who promptly put his mini-drought behind him by cooly finishing into the side netting, allowed the one goal margin at half time.

The second half started much as the first with high pressing by the Saints causing many of us to grab our rosaries and mumble in the general direction of Liverpool's beleaguered back line. Then, as if to renew faith in a higher power, who clearly has time to take in a match or two over the weekend, Suarez found the recently-entered Raheem Sterling who passed into the goal and restored breathing to Liverpudlians while simultaneously knocking the air out of the valiant home team.

It was all downhill from there as Liverpool took over the match and cruised, relative to the play so far, for the remainder of the game. It was inevitable that the Uruguayan talisman (can we use that word for him yet?  Or is that still simply used with the likes of Steven Gerrard) was involved in the final goal, too. His twisting and turning with the ball glued to his boots caused an ill-fated extended leg over which the red number 7 tumbled, rightly earning a penalty which the unflappable Gerrard converted with aplomb (the only appropriate word even though I use it with him often in these situations) high into the right corner.

Now sitting second in the table, it won't be long before the chorus of title dreamers becomes cacophonous. And with Lucas, Sakkho and Enrique all coming back from injury, maybe, just maybe, our thin squad is thickening at just the right time.