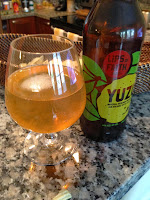 This beer was drunk several weeks ago and reviewed largely via memory, so don't be too literal in your interpretation -- it's more an impression of what we remember about the beer than anything else.  And there are some times in which our memory serves us better than others....

That being said, the first time we drank New Belgium's Lips of Faith Yuzu Imperial Berliner Weiss it was poured into a snifter from a 22 ounce bottle during a recent gathering at Correspondent Ed's -- obviously, the beer was drunk prior to the police shutting down the affair, a rather common experience from our observation (in fact, Ed didn't so much as flinch when the handcuffs were placed on his wrists, and he has the stone-faced "perp walk" expression down cold).
The beer was a pale yellow/gold color, and whatever white head it initially expressed itself with quickly disappeared.  Yuzu struck us as clearer than some other Berliner Weisses we've drunk -- if clarity is your thing, this might be your sour.....
If you judge a beer by how it smells and tastes, however -- as most people tend to  -- maybe it's not your beer.  We smelled a wheaty citrus scent, and by and large the taste followed the nose.  The beer wasn't nearly as sour as we would have liked -- especially coming as a Lips of Faith offering.  Overall, we had kind of a "meh" reaction to Yuzu -- hoping for more of everything: more citrus, more sour, more tartness.  In fact, we wanted more of everything except this beer.
Don't get us wrong: it's not a diaster by any means, it's just not something we'd seek out on a regular basis.  And not because of it's taste, but because it could have been so much more.  Yuzu is the victim of high expectations and low follow through:  C+
Posted by farlieonfootie at Friday, November 01, 2013