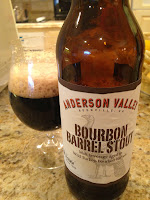 (6.9% ABV). Wild Turkey Bourbon Barrel Stout was poured from a bomber-sized bottle into a tulip glass at a recent celebratory affair.  The beer poured a thick, dark chocolate color with a massive tan-colored head composed of millions of bubbles of mixed sizes.  As the beer's name implies, this offering from Anderson Valley was aged in bourbon barrels from famed Wild Tuurkey distillery.  The first version of this partnership to be produced is an aged version of the brewer's Barney Flats Oatmeal Stout.

The beer's smell was primarily composed of the malt flavors up front, with just a mild hint of bourbon on the back end. The taste was a luscious chocolate, with the bourbon very mild and saved for an ultra smooth finish -- a finish that was complemented by the rich taste of dark chocolate. The beer's mouthfeel is medium, as is the carbonation. Recommended: A-
Posted by farlieonfootie at Thursday, August 29, 2013