Impossible is Nothing: Germany 1 - USMNT 0 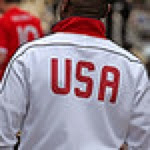 Coach Mark and Correspondent Ed weigh in on the USMNT's advancing through the Group of Death to the Round of 16:

So we backed into the next round. There is no sport in the world that can bring you that anti-climatic feeling like soccer. We lost, and we won at the same time. Muted high fives everywhere.

You got to like the competitiveness of this team. The team has the personality of Jermaine Jones, Michael Bradley and Kyle Beckerman, which is 100% scrappy hustle. Unfortunately it also has their offensive skill set.

Bradley has looked like a defensive mid pretending to be an attacking mid the whole tournament. Jones ended up playing target man part of the game because he's the only player on our offense who has the physical strength to compete for balls with a player on his back. We had a terrible time controlling the ball in our midfield to come into the attack.

I think Clint Dempsey's doing a good job faking the striker position. He's not fast enough to go by anybody, and not strong enough to play target, but he's got such a great feel getting in good spots and is the only guy with any precision on the team so he can survive.

I thought Omar Gonzalez was terrific today. Horribly tough spot to be put into, but he was a beast in the air, and showed a faster recovery step than Geoff Cameron. I think Cameron had a terrible game the other day, but he's a player. I would not mind seeing him sub into the defensive midfield to end a game. I thought it was kind of lousy that he got pulled after such a rough game when he was so solid during qualifying, but Gonzalez justified the decision, at least for today.

This team's Achilles' Heel is a complete lack of speed and precision on the offensive side. Dempsey and Graham Zusi (who I thought was very good today) are the only two offensive creators who have any precision on the final pass or shot. But neither of those two guys has the speed to threaten vertically.

Bradley's been just awful in front of the goal. Bedoya is basically an invisible player, and plays like a third outside fullback with a hustle-only game and Brad Davis showed why he got passed over three times for World Cups when he was in his prime. He's too slow and not tough enough on defense. It was a miracle we survived him today.

Outside of flashes of creation by Zusi, we got nothing from our wing players. When you look at the Achilles' Heel of the team, no attacking speed, and no precision in the final third either with the pinpoint pass or the pinpoint shot, it's all the more remarkable that Klinnsman left Donovan behind. I don't think Donovan would have missed the open netter that Bradley had last game, or the almost open netter that Bedoya slammed into two oncoming defenders rather than burying into the left corner. Donovan would have been on the end of at least one of those, maybe both, and we'd be feeling great about things going into the tourney. It's pretty clear Donovan got left behind for Julian Green, who is not going to play in this Cup, and was given a spot to secure his commitment to US soccer. That's kinda nuts.

I like this team's personality and chemistry a lot, and their defense has been much better than I thought it would be. Maybe leaving Donovan behind helped in those two categories. But every time we fail to connect in the counter attack on open passes, or missed these open netters, I think of Donovan.

P.S. Demarcus Beasley has survived three games without giving up a goal. That's a record for US left back.

P.S.S.  I forgot about Zusi's two blown corner kicks. Those were awful. I'd like to retract my positive comments on his performance. That's another spot where I'd like to have had Donovan.

MLS Soccer's blogger had analysis of the omission in his game rankings. "Toothless wide performances" is a more elegant a description than I gave.

"On the down side, it was quite frustrating to watch the US neglect to run at Benedickt Höwedes after he went into the book early. After another pair of toothless wide performances with the ball (and Julian Green still unused), one also cannot help but think the team is doing this all the harder way without Landon Donovan. Grimace or gripe if you will, but his strange absence is still a valid issue."

I agree w most of what you said. Unfortunately, it's not just speed, it's overall "goodness".  The 4-1-4-1 today put too much pressure defensively (and offensively in possession) on Beckerman, who's too slow to be Paul Scholes and not skilled enough, either.  Fabian Johnson was great last game and absent today offensively and I'm not sure why.  Donovan and not Bradley is a better fit for the no 10 position.  I also want more of Yedlin out there.  He's not great, but he's crazy fast.  We have three holders, two of which are clones of each other.  That said, you need to rest guys this tournament, so I liked the different guys out there even if they didn't perform.  I would have liked to see Mix Diskerud get a turn to rest Beckerman.

This is farlieonfootie for June 26.

Posted by farlieonfootie at Thursday, June 26, 2014