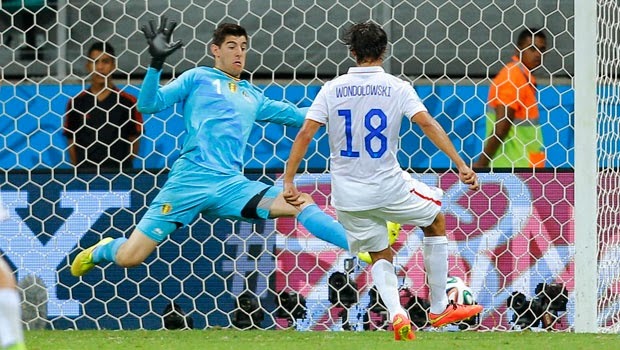 The inter-office debate rages on:


Mark: Well that was a heart breaker. My random thoughts: we are back at 1994 watching "Bora Ball" and the all-heart team try to dodge twenty shots and then steal the game with a goal. That wasn't the style Klinsmann was supposed to bring in. This was a great exhibition of heart, but we got outshot and outpossessed dramatically in three of the four games. There could have been some very lopsided losses in this Cup for us.
Ed: That's a step too far< I think.  Klinsi didn't promise possession, just more attacking soccer.  And when we got the ball we did attack in numbers.  Plus there was no team that played a tougher four opponents.  But no, we are not as technically gifted as Belgium's golden generation or Germany.  But we were surprisingly close to Portugal on that regard.
Michael Bradley is the toughest player to ever play for the US national team, but should never play another game as an attacking midfielder. Klinsmann really did a poor job of casting him.
Ed: Completely agree.  He never looked better than when he orchestrated from the holding position in extra time.  I was reminded how solid he is back there where he should be.  He simply doesn't have the speed or creativity or desire to take on players and space in the attack.  Dempsey does, and dempsey also looked better when he returned to the number 10 spot.
Mark: Jermaine Jones is a beast, but like Bradley was expected to carry the team offensively and he just does not have the distribution ability.
Ed: Agreed again!  A tough holder who makes for a great spine.  Guys like that thrive on the premier league and his muscle made us better.  But destroyers are never also creators.
Mark: Kyle Beckerman is a tremendous position player, and we missed him today. The middle was far more open without him in there. Belgium had far more opportunities than German which is a stronger side. Was shocked he got pulled.
Ed: Can't say, really.  Cameron made Fellaini look pretty ineffective.  But Beckerman had a good tourney for a slow dude with big hair.
Mark: Why does it seem like we switch formations every game in the World Cup under Klinsmann?
Ed: I think that's called tactics and I'm okay with it.  The Dutch switched their formation at halftime against Mexico and it paid off, we can switch game to game if we have too.