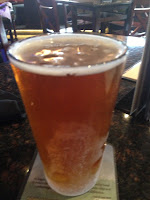 (5.00% ABV) Pablo Beach was poured on draft at American Social in Fort Lauderdale, Florida into a much-too-cold glass that sapped the beer of most of its head, and likely a fair bit of its smell, as well.

Because the beer's scent was virtually non-existent. We mean nothing; nothing at all.

It was interesting to taste, however.  Pablo Beach had a vaguely citrusy sweetness mellowed by a bread-like aftertaste, followed by just enough hoppiness in the finish to keep it interesting. We would describe this as very well-balanced, basic beer. A solid B from a small brewery up by north Florida way.
Posted by farlieonfootie at Thursday, September 19, 2013