There we all were in the restroom of FOF headquarters, holding rolled up cold cuts – salami, ham, liverworst – in an effort to entice our curled up boss-man out of the stall he had been curled up on the floor of for several hours.  At first people weren’t sure where he was, but then the whimpering got louder and the frenetic shouts of names like “Hangelaand!!!”  and “Berbatov!!!”  and “Van der Vaart!!!” gave away his location.

Perhaps it’s not easy being the boss some times, but I suspect it’s even harder when after all the bluster and chest pounding you end up LOSING YOUR OFFICE FANTASY POOL to guys like me and an office page named Raul or Mike or something like that (seriously, I don’t know who that guy is, but I suspect computer hacking had something to do with his ability to edge me out for first place in the league by 3 points).

I’m pleased to say that we finally did get him out of the stall – we grabbed him when he reached for some bologna  – and even then I was surprised to see him in such disarray.  I think I’ve seen the frayed blanket before (his light blue “woobie” (yes, I said “light blue” United fans!)), but I’ve never before seen the tiny stuffed deer that he was cuddling with.  I mean, seriously, I’d almost think it’s sad if it didn’t make me so hells bells happy.  So let me say it to all of you here first:

RENDER THE SALAD UNTO ME!!!


And as for the Boss Man, the next time you see him riding home in his egg-yoke covered red Vespa with the “Honk if You Heart Rooney” bumper sticker on the back, just remember that there sits the analyst that just didn’t have the stuff to win his own office pool.  And more importantly, that there sits the guy who will heretofor be referred to by all his employees as  . . . wait for it . . . “Bambi.”  I mean, really, it was too easy.

But hey, what in the world does the Bambi have to be sad about anyhow?  By comparison, on Sunday I had to endure the infinite sadness of Blackpool’s loss to United and their relegation back to the Championship Division of English football.  And by “infinite” I mean over a hundred billion billion billion.

Blackpool had become a close friend over the last 8 months.  Watching them beat Liverpool twice was immensely fun, and watching them almost give United their first loss was enjoyable as well.   My entire family has grown to know their players, and also to know that no matter how many they scored in a given match that they really needed just a few more to get the win.

With so many teams that are unwatchable in the EPL, including the three times just above relegation, Blackpool was arguably the most fun team in the league.  They not only attacked often, but they also attacked in style.  I recall watching Charlie Adam nutmeg Carlos Tevez twice in one of their games against City – a game that they dominated only to lose on account of an offside goal and a poor penalty call.  I also remember them throwing the kitchen sink at Spurs, beating them once and coming within minutes of beating them a second time at White Hart Lane.

The orange jerseys, Coach Holloway with his colorful quotes and candor, the majestic cross field passes – it’s all only a memory now.

AND FIFTH GOES TO SPURS

It should be noted  that Spurs did finish their season with a win and hung on to fourth place.  Whoop dee doodle.  No Champions League, of course, but there is the “who gives a cr*p” Europa league competition where your players get worn out and injured and you get – pretty much nothing.  Save it for WBA, they’d enjoy it more.

With the season over, I’ve pretty much resigned myself to watching the occasional five to ten minutes (okay five) of MLS (see, e.g., Wigan and Wolves and Blackburn).  Even though it was a long season, it still seemed to end so suddenly.  Fortunatey, I’ll still have my Sky Sports this summer, and am pleased to announce Kirsty Gallacher, the final winner of the now famous “Why Sky Sports is Better than ESPN” Award: 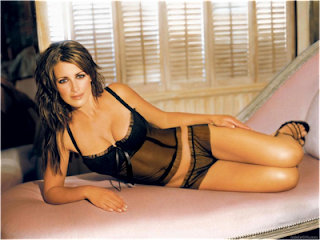 Thank you Kristy, if it weren’t for you I’d still be thinking about Charlie . . . . wait, what was his last name again?

This is farlieonfootie for May 26.